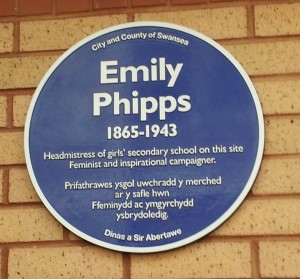 Plaque to Emily Phipps in Orchard Street, Swansea.
Thanks to Avril Rolph for the photo

This week a plaque was finally erected on the site of the school where feminist campaigner Emily Phipps was headteacher. An English woman, she worked for many years in Swansea in the late nineteenth and early twentieth centuries.

A short summary of aspects of her life was included on BBC news for South West Wales  webpage that does not do her justice. Emily was not only a feminist and headteacher and suffrage campaigner but also a leading trade unionist. A one time executive member of the National Union of Teachers in 1915  she became disillusioned over the union’s failure to support the vote for women or to campaign appropriately  for equal pay. She campaigned for a women – only union, the National Union of Women Teachers, in which she played a leading role, as president, editor, executive member and eventually, barrister.

I wrote about her in my book Deeds not Words and lobbied for her inclusion in the Oxford Dictionary of National Biography and then contributed her entry. She was one of my ‘favourite’ suffragette teachers not primarily because of her achievements but because of her apparent bad temper particularly towards those members of the NUWT she thought were insufficiently active!

It’s good that Avril Rolph and the Women’s Archive of Wales were able to convince Swansea council that Emily was worth remembering publicly.