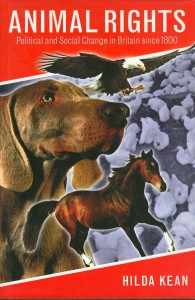 I wrote this book to explore the long traditions of campaigning for animal welfare and rights in Britain.I was particularly interested in analysing why particular issues were taken up at different times. (For example the welfare of ‘farm animals’ preceded that of dogs). In contrast to those who have argued that legislation was introduced once animals were no longer seen in daily life, my argument was that animals were being seen in the streets of London and this sight led to various campaigns for change in animal treatment. I also looked at the impact of images of animals, for example in the paintings of Landseer and how this cultural presentation in turn affected the treatment of real animals. Some within Animal Studies have not liked the book because of its framework. Although I would probably  not write the book in the same way now I still think it is valid in the issues it raises: such topics are still not part of mainstream history.

‘It is very fine work indeed: without a doubt, the best history of pro-animal humanitarianism in the UK ever written’, Andrew Linzey BBC Wildlife Magazine

‘This is the best book on the subject I have come across’ Paul Johnson, Daily Mail

‘The book is a triumph for creative endeavour, maintaining an unerring focus on its own story while confidently sweeping back and forth across the boundaries of traditional disciplines, drawing in only the relevant from the mass of detail before it, like some vast, discerning whale able to feast only on the most succulent plankton. Hilda Kean has been everywhere on our behalf – politics, the law, the arts, theology, history of all sorts – and returned with a tale compelling both in respect of what she has to say and (just as important in this age of earnest un-readability) of how she says it’. Conor Gearty The Tablet

‘Animal Rights is a fascinating and very readable account of changing attitudes to animals and the evolution of animal welfare societies over the past 200 years… We owe a great deal to these pioneers and their modern counterparts because “those who bring compassion and humanity into their dealings with animals enhance not only the lives of animals but of people too”; and we should be grateful to Hilda Kean too, for bringing us their stories’. Paul Appleby, Oxfordshire Vegetarians and Vegans