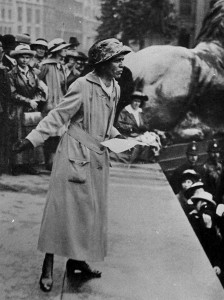 Agnes Dawson (1873-1953), feminist and headteacher, trained at Saffron Walden College. By 1917 she was headteacher at Crawford Street infants’ school in Camberwell. She was an enthusiastic supporter of Montessori active education for young children. She called for nursery schools to be built wherever there was a demand to assist working-class women.

She was active in the National Federation of Women Teachers (NFWT), a ginger group inside the NUT before the First World War. Within the NUT she campaigned for the union to support women’s suffrage and equal pay, and to oppose mixed elementary schools, since female teachers would be denied status and promotion in male-dominated mixed schools. She stood for the national executive of the NUT unsuccessfully in 1916 and 1917. In 1912 she became the first president of the Women Teachers’ Franchise Union. She was a constitutional suffragist, and stated that the only militant act she ever undertook was to sit up all night at a friend’s house during census night 1911.

Agnes was a member of the central council of the National Federation (later Union) of Women Teachers from 1914 to 1937. She was president of the NFWT in 1919 and helped lead the campaign for the federation to leave the NUT and become an autonomous union, the National Union of Women Teachers. Although a Labour Party member she dissuaded the central council of the NFWT from affiliating, believing that women in the Labour Party would be ‘swamped’. In 1925 she resigned her teaching job and stood successfully for the London County Council as a Labour Party candidate for North Camberwell. She did this full-time, sustained by money from National Union of Women Teachers’ members. When Labour gained control of the council for the first time in 1934 Agnes became chair of the powerful finance and general purposes subcommittee. After much campaigning she persuaded the leader, Herbert Morrison, to remove the marriage bar on women teachers in 1935.

In 1937 Agnes left her advisory post with the National Union of Women Teachers and did not stand again for the LCC. She retired to Newport, Essex, where she continued public work as a JP. From 1925 she lived with Anne Munns, a former teacher, whom she called her ‘pal and partner’, until Anne’s death in 1952.