Historian Raphael Samuel died nearly 23 years ago (on December 9th 1996). We had worked together as historians at Ruskin College, where I was employed from 1993. I knew he was very ill and based in his Spitalfields home in London.

Oddly I recall that one day I was working in the then wonderful, dark , British Library in the British Museum. The place was not just a wonderful site for me but where I would have often seen Raphael rummaging away. I had not looked at a newspaper until I left early in the evening to then, distressingly, see an obituary of Raphael’s death – on just the previous day – already included on a large page.

Although I have often recalled him I had probably forgotten about when this sudden memory took place and now find it striking that his death occurred – before my own age now. Now I have only just recalled speaking at his memorial celebration in Conway Hall and also arguing for the re-naming of a Hall in the then Ruskin College with an engraved wooden memorial in his name, (When Raphael Samuel Hall was demolished – alongside Ruskin College itself – the wooden plaque went to the Bishopsgate Institute where it is proudly displayed – just some yards from Raphael and Alison’s former home.)

But I have started to recall this not through talking to anyone in particular but through reading A Radical Romance just officially launched and written by his wife, Alison Light. That this was only finally written and published now is striking. It is a wonderful book first involving Alison’s autobiographical experience revealing details of being a particular teenage young woman. (I could never manage to write about my life in that way.) Issues around Raphael’s life and his focus on writing comes to life but primarily it is a text written about the lives of Alison and Raphael together (irrespective of the rants of historical hysteria in certain times and places…)

While the book is so well written and engaging it has also reminded me of many things I had forgotten about working with Raphael so many years ago. I therefore include below, an image of a day out around Ironbridge where we went with some of our then History students at the end of year in 1994.

I ended up in tears finishing the book on a train into London, not because it was simply distressing but rather because it clearly captured so engagingly the explicit time in which Alison and Raphael lived. This is one of the most wonderful books I have read and would thoroughly engage people, particularly those who knew Raphael in various ways, as well as people thinking about their own memories and of lives of friends now ended. (A Radical Romance. A Memoir of Love,Grief and Consolation, (Fig Tree, an imprint of Penguin Books. Only just out but already cheaper than the hardback in Abe Books!) 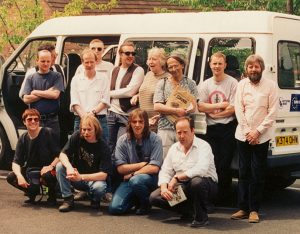