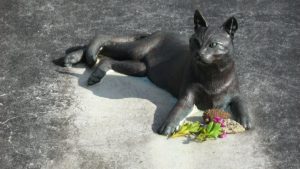 On sailing to the uninhabited Elephant Island on three lifeboats Shackleton set out to South Georgia in a single lifeboat containing only Harry McNeish and five men, with McNeish ensuring the success of the lifeboat with his carpentry skills. Shackleton had threatened to shoot McNeish for arguing that sailors no longer had to take orders because their contract lapsed when the Endurance was crushed and sank in November 1915.

Before his death in 1930 McNeish was visited and stated over and over again, ‘Shackleton killed my cat.’ McNeish’s grave in Karori cemetery, Wellington in New Zealand was originally unmarked and only received details of his original name from the New Zealand Antarctic Society who erected his headstone in 1957.

The cat, Mrs Chippy, was only commemorated on the statue made by Chris Elliot in 2004 and commissioned by the New Zealand Antarctic Society. This modern statue followed her former death in 1915. The family of McNeish had only lobbied the British government to try to get him honoured and awarded the Polar Medal in 1997 – which was turned down.

There are also no words whatsoever about the statue of Mrs Chippy lying at the bottom of the grave. It is , however, this cat, rather than the body of a dead male carpenter, which is often visited by those attending the cemetery and then present the cat with flowers.