WEA Education and Democracy conference: what knowledge? what democracy? 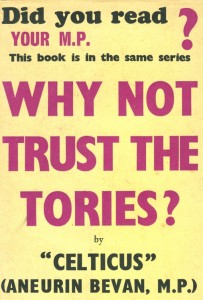 I am delighted to have been asked to be one of the speakers at the forthcoming WEA conference , WEA Education and Democracy Flyer Final ,in Tonbridge on Saturday 14 May questioning the nature of both education and democracy. Inter alia I am going to refer to the idea of knowledge and democracy during the Second World War and how this has changed.

In his popular pamphlet Why not Trust the Tories? Nye Bevan finished the work with an appeal to the spirit of the Levellers and Thomas Rainsborough’s intervention at the Putney Debates “one of the most memorable debates in British History”, particularly:

“The poorest he that is in England has a life to live as well as the greatest he”.

Importantly, Bevan assumed that this historical event would have been known to his readers. I doubt if Jeremy Corbyn would ever think of making such a reference for fear of his audience not having a clue about the English Revolution – or that there had ever been one.

One of the reasons the readership of 1944 may have known this history was the work of the Directorate of Army Education with its weekly classes entitled The British Way and Purpose. While clearly devised to develop morale, the classes did encourage debate around what sort of democracy was needed after the war. The opening pages arguing that “Democracy must take the offensive” demonstrate the way in which debate has shifted so drastically in recent years:

“We we must defend the positions which our fathers (sic) won-civil and religious liberty, free speech, the right to combine,local democracy,Parliamentary institutions,and our great legacy of social legislation, we must also take the offensive.Democracy…is a dynamic idea.”

The Right to Combine! Local Democracy! Civil Liberties! And this from the Army…