Public history group in Bloomsbury with Ruth Richardson on Dickens, the workhouse, the campaign 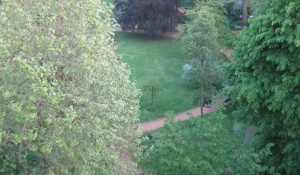 Having been told that the public history group was no longer welcomed at the Bishopsgate Institute it has taken a while to find another location. I am delighted that staff in UCL Institute of Archaeology are now involved with others in the group in organising events. They have offered us a new venue. It’s in the Institute in the heart of Bloomsbury at 31-4 Gordon Square on the sixth floor (with lifts.) The view above was taken last spring from that location and gives another perspective on  Bloomsbury.

The first session will be on Saturday 31 May. The speaker is Dr Ruth Richardson on Dickens & the Workhouse.

Author of Dickens & the Workhouse: Oliver Twist & the London Poor, The Making of Mr. Gray’s Anatomy and Death, Dissection & the Destitute  Ruth will talk about her involvement in a campaign on the streets of London the research processes for which led her to a discovery that was to have a major impact on public history.

As she explains, ‘In 2010 the Outpatients’ block at the Middlesex Hospital was threatened with demolition. The main Hospital had already been reduced to a field-size area of rubble. Local people called on me to help because I had written about a Victorian doctor who had worked in the building when it had been the Strand Union Workhouse. We had 5 weeks to save the building from the bulldozers. Listing had been rejected by the Minister, and there seemed no hope.  But fiction came to the rescue, and the building is still standing.

This talk will tell the story of the Workhouse and its eventual listing, and after the talk we can take a walk to see it and its setting.’

We meet at 11 for coffee with the session starting promptly at 11.30

I will be posting details of future events from Autumn 2014 here.  As always, suggestions very welcome.