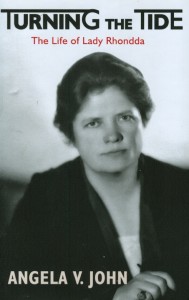 I have always had a soft spot for Lady Rhondda who I ‘encountered’ many years ago while researching  politics between the wars. In my work on suffrage feminists of the 20s and 30s I was interested in exploring the ways in which former suffrage activists thought about their lives after the vote was partially won in 1918. There were debates amongst feminists at the time about how to define that period. Was this a period of progress? Did it now mean that other reforms would follow? Or, more pessimistically, was it a time of political downturn and retrenchment? Certainly many of the National Union of Women Teachers activists I have written about were no naïve optimists and many former militant suffragettes were well aware of the need to write their own histories before they were written out of the past.

So I ‘encountered’ Margaret Haig Thomas as someone who wrote her own autobiography This was my World – and analysed this configuration. I tended to identify with her aims as an‘ old feminist’, as someone who was seen by some to be out of time but nevertheless committed, principled and resolute.

This new book by Angela V . John offers many new insights into the life of Viscountess Rhondda, not least emphasising her welsh identity. And it is a history re-written for the new times. While work on such women in the past has concentrated on suffrage activism or sexuality this carefully written book also introduces us to Margaret as “The Queen of Commerce”. John carefully weaves different aspects of Rhondda’s life on a thematic – rather than a chronological – basis. Without any attempt at over-theorisation Angela John presents us with an illuminating and thoughtful account of the life of someone many feminist historians thought they knew.

This book, however, made me think a-new both about  Lady Rhondda but also about the way in which history is written and re-written. I doubt if Angela John would have written the book in this way 30 years ago – but then I doubt if I would have read this book then…

Apart from having  thorough footnotes, fulsome praise for other writers and a range of photographs the book is also easy to read; what I call a ‘bed book’, that is, a book to read late at night without feeling the need to scribble notes. (I also discovered that Margaret was into cats and used to sit on a particular chair at night to warm the chair for her moggy!)

London Review Bookshop have now stocked it after I told them that Hatchards in Piccadilly had advised me to go to Waterstones – in Cardiff – to get a copy(!)