Filming about Spitalfields’ weavers for BBC4 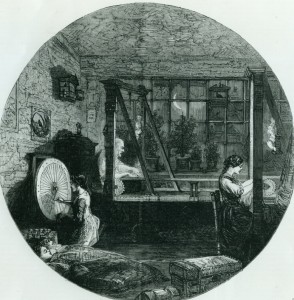 I spent this morning being filmed walking around Spitalfields and Bethnal Green for a new BBC film about the oldest businesses in England, this one being about the firm of Toye,Kenning and Spencer that specialises in regalia. The Toye family – like the Keans – worked as silk weavers in Bethnal Green. In order to survive with the mid-nineteenth century downturn in trade my family turned to furniture making. Some of the Toyes managed to survive by specialising in high quality goods.

I have previously written about silk weavers in an article analysing the census returns in depth and in London Stories.

If nothing else, today’s early morning outing confirmed my view that detailed analysis of street by street census returns gives a far richer impression of an area than broad brush generalisations. Like the weavers who lived in the streets off Bethnal Green Road – who continued to weave even though history books tell us that the trade was no more – in the Old Ford area the Toyes also continued in this line of work.

As late as 1935, there are accounts of a few weavers remaining in Alma Road, near Victoria Park.