The joys and tribulations of the researcher: London Sketch Club and the British Library 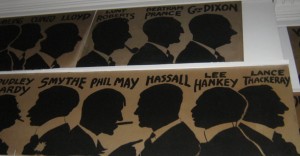 As part of my research arising from the diaries of advertising agency manager Laurance Holman I have recently visited the interesting archive of the London Sketch Club, of which Laurance was a member for over 20 years. Meeting weekly to undertake life drawing or to complete a sketch on a given theme this was a lively haunt for a range of artists including Punch and newspaper cartoonists and those undertaking government propaganda during both World Wars. By correlating information from his diaries with records such as the visitors’ book it is possible to explore different ways of researching lives in which personal material becomes an impetus for wider social contexts.Such research activity is invariably pleasurable.

Visiting the British Library is a less happy experience. Even before Easter readers were being advised not to attend – due to overcrowding by students  cramming for their finals. An official leaflet advised ‘ You may find that alternative local libraries have more space available’ apparently oblivious to recent closures and lack of books in council libraries. Many readers use the British Library for its earlier purpose – reading books unavailable elsewhere,  a location of ‘last resort’ – rather than as a place to hang out and send text messages. Yet no longer can it even be relied upon for such book provision. Despite the statement of the former chief executive when I last complained on the matter that ‘The only UK imprints that are lent through the Library’s document supply service are items purchased for loan’ too often books are not available as they are on loan to other libraries – and the British Library has bought only one copy, precisely for loan purposes .Given the absurd prices of hardback academic books it is not feasible for individuals to buy them – but the British Library can no longer be relied upon to stock every book printed in Britain. The new chief executive Roly Keating recently stated in the Guardian that in the BL ‘you can palpably feel the creativity rising up out of the reading rooms and the café’. I suppose that it one way of describing a social place for sending texts, listening to personal music through headphones in the rare books room or hanging out in the coffee bar doing facebook. But for those of us keen on reading, research and note-taking it can be a source of irritation and frustration.